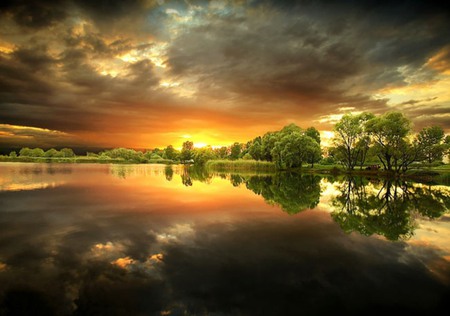 God created the heavens and the earth…”In the beginning.” His breath-taking creation sits right under our nose and some days, it sits largely unnoticed.

Evidences of a Creator are numerous. Each day, as we enter a New Year, let’s take a look at facts which confirm the creation of the world. There’s not much “scientific” about Big Bang and “old Earth” theories of origins.

Let’s review a few scientific observations that support the age of the Earth being a few thousand years old.

Found in rocks across the world, evolutionists point to zircon crystals as being more than 4 billion years old. However, the atoms inside these crystals are a far less than reliable “clock” into the age of the Earth. As usual, the “old Earth” theories are built on levels of wholly unproven assumptions. They are far less than fact.

The primary study for this theory comes from John Valley, University of Wisconsin. According to valley, the small zircon grains – each no wider than a human hair and from a remote, arid region of Australia – hold the evidence of the 4 billion year old claims. In fact, within these grains, only four of the hundreds of strains tested yielded dates approximate to 4 billion years. One set of assumptions is the series of steps in the creation of the earth; moon blasted from the Earth, water condensing from the steam of the hot Earth, and so on. The dating is based on the amount of lead within the samples. This leads to another set of assumptions, including the starting conditions for the lead samples and the decay rates for the accompanying uranium. The team also assumed that the samples had zero contamination whatsoever from outside elements, which is very unlikely.

Furthermore, the “big bang theory” itself has a light-time travel problem, more commonly known as the “horizon problem.” Adherents to the “big bang theory” propose that the universe started as a very small object, which spread cosmically farther apart over time. In this original small object were many areas of different temperatures. However, we know now that the universe has an extremely uniform temperature at a very great distance. So how did these different areas begin at different temperatures, spread light years apart over billions of years, and end at uniform temperatures?

NOT ENOUGH SEDIMENT ON THE SEAFLOOR

If the Earth were >4 billion years old, then the sediment deposited on the sea floor would be miles deep. It’s not. Rather, the average global thickness of this sediment across the sea floor is approximately 1,300 feet.

Moreover, these sediments have indications of being deposited quickly and at one-time, instead of gradually over a long period.